A trite title for an account of a free climb of MCM on Sentinel, Drakensberg.

On 22/09/2018 Chris Klaynhans and I climbed the route MCM. Here is a recollection of that intense, stormy weekend. 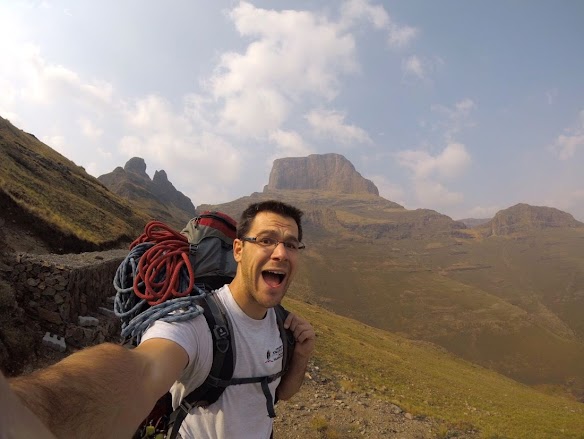 MCM is a 7-pitch long bolted route on the NW side of the imposing Sentinel Peak, in the Northern Drakensberg. It is named after the initials of its first ascensionists, Margaretts and McCann. Unlike many Drakensberg climbs, notorious for dodgy scrambles up fragile crags and slippery grass ledges, MCM meanders up a steep basalt face, uninterrupted by grassy ledges, and seemingly solid – at least from a distance. The crux pitch goes at 21 (6b/6b+), a grade that would have intimidate me only one year ago, but that now feels like a thrilling little challenge. Moreover, MCM is a bolted route: this is also an exception in the ‘Berg, and it makes for a slightly more relaxed and faster day out, without the need of placing your own protections and wondering if they will hold a fall. 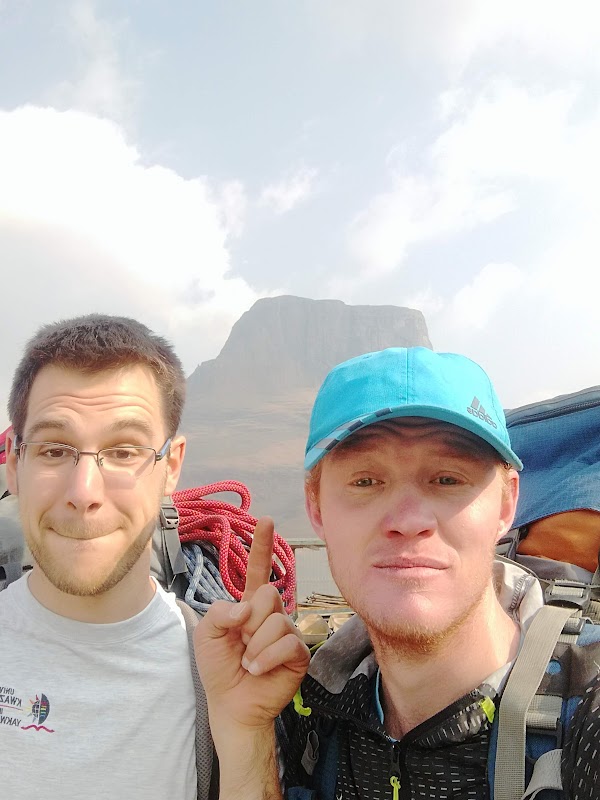 There it is! Picture by Chris / Google Photos

Chris and I planned to climb the route on the Saturday, sleep at Sentinel Cave, and perhaps tackle another climb on Sunday.
On Friday evening I met Chris at his place in Bethlehem, conveniently located at about one hour drive from Sentinel. Chris’s pad in a real climbers’ den, the furniture of which consists mostly of crates full of climbing gear; sleeping on his floor always feels like camping, which eases the mind about the alpine starts ahead.
We woke up at 5 am, caffeinated ourselves, and drove up to Sentinel car park. Despite pocketing 50 R per person of entrance fee and 80 R per person per each night spent on the mountain, the local management is letting the dirt road that leads to the car park be washed away by the weather, and soon enough only vehicles with serious off-road capabilities will be able to make it there. Gunther, an old Subaru Forester, made it to the top with only a couple of rocks scratching its belly, but it might have been the last time if they don’t fix the road. Anyways, by 8:30 am Chris and I had packed climbing and camping gear and were ready to go. We reached the base of the route about one hour later, and by 10 am we started to climb. Chris had climbed the first pitch before, so he gladly left the honour of the lead to me. The first pitch was to be my favourite: long and beautiful with some elegant friction sequences, well bolted, and overall quite relaxed for the grade (19). What made it challenging was the ridiculous rope drag. During the approach Chris and I had spotted some poachers and their dogs on a ledge, so we decided to haul our backpacks up to the fifth bolt to avoid surprises. While keeping the bag safe, this manoeuvre left the bags hanging right in the way of the ropes. On the last few meters before the chains I had to climb while dragging a few meters of slack rope with my teeth. 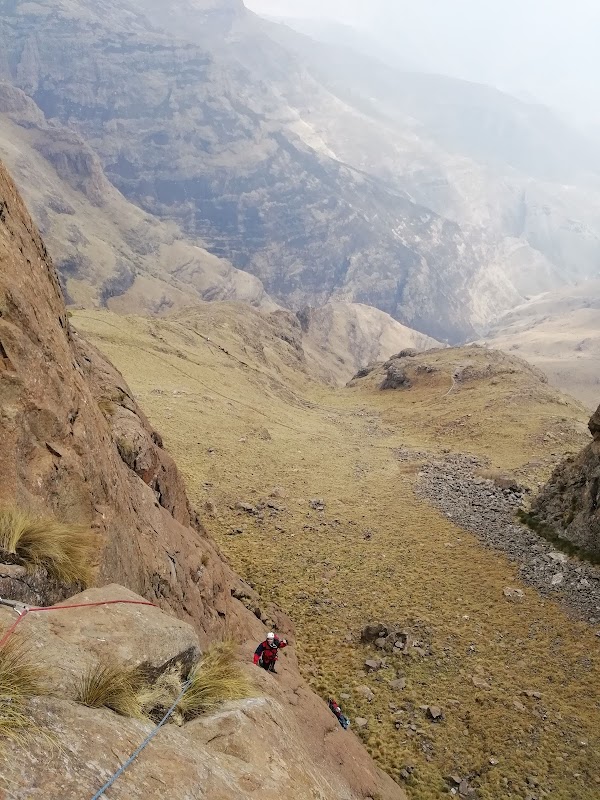 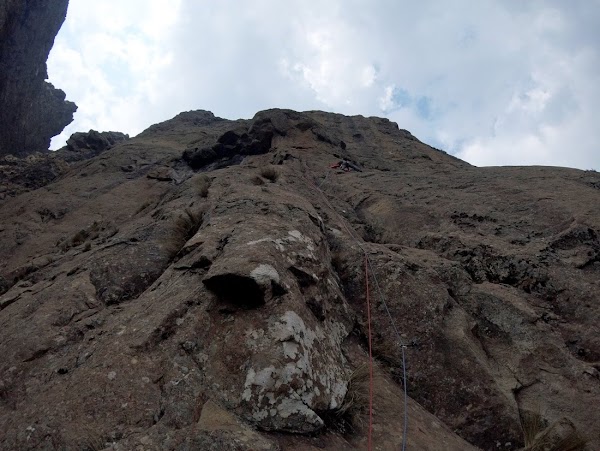 Chris went on to climb the second pitch. Although being only graded 17, most of it consisted of an exposed traverse that sketched me out even while seconding it. As I pulled on a hold I dislodged a big rock. I considered throwing it below but it was going to serve as a good foothold soon after, so I simply pushed it back where it was and stepped on it. As they say: “in the ‘Berg, if you find a good hold, make sure to put it back after you use it!” This line is supposed to be a joke but it proved scarily accurate.
It was time for the crux pitch. Chris chivalrously left the lead to me. I pulled over a small bulge and started tip-toeing towards the crux, clearly marked by three bolts close to each other. The bolts allowed to safely attempt to free-climb the crux or even to aid past it, if one wanted. The trickiest part for unlocking the sequence was to pick the least fragile holds and hope that they would not crumble under the pressure of hands or feet. I got lucky and continued to the chains, following big holds on scarily hollow-sounding blocks.
From that point on, the route continued with four pitches all graded 17 in a rather liberal way. At the beginning of the fourth pitch Chris clocked some airtime after a hold broke. He down-climbed, composed himself, and sent the pitch free. This pitch felt like a desperate 18 to me, even if I was seconding it. The last three pitches felt easier than the given grade. We made quick progression on them until the last one, which finished with a delicate traverse under a little roof with a nice horizontal crack to lay back on. It’s a pity that, while leading this pitch, my main concern was to avoid dislodging any of the huge dodgy blocks that could have either cut the ropes or killed Chris at the belay station.
From the end of the climbing route we reached the summit plateau via a short easy scramble. It was my first time on top of Sentinel. The wise move then would have been signing the summit book and quickly head down. Instead we decided to chill on top for a while… And that’s when the weather came in. Being caught in a thunderstorm on a mountain was always one of my biggest fears regarding mountaineering, and somehow I managed to dodge it for a decade, but not this time. A hailing thunderstorm caught us half way down the Normal Route. Being away from the exposed top of the mountain reduced the risk of being hit by a lightning, but still scared me out of my wits. I hid in a scoop at the base of a small cliff and just waited for half hour, looking at the hail piling on my jacket and hoping that I was not going to die. Chris was a few meters away and, in all his Afrikaans manliness, did not seem to budge (or hid his fear better than I did). 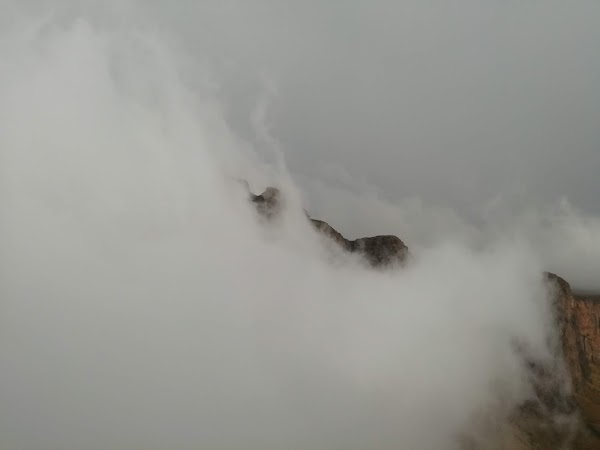 Before the storm / Google Photos 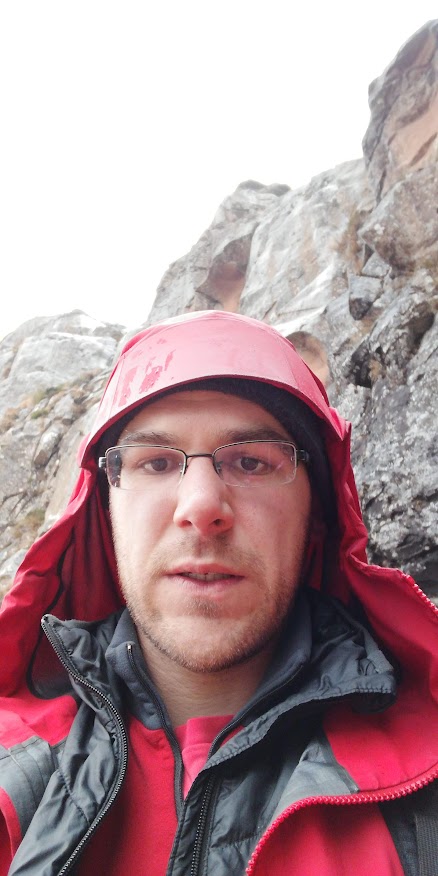 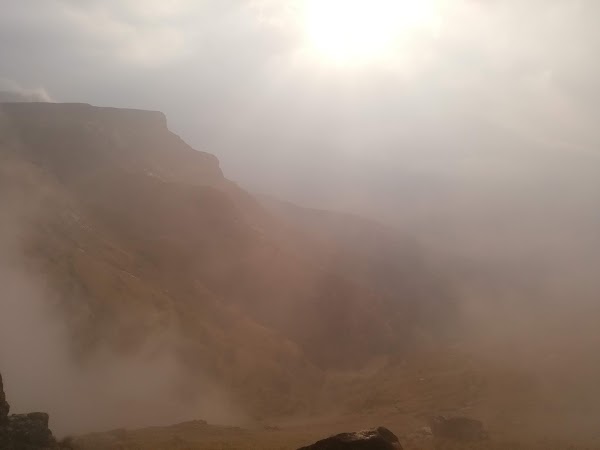 After the storm / Google Photos

A break in the storm allowed us to hurry to the abseil point and reach the grassy slopes below. It was not over yet: we still had to walk back to the base of the route to recover our backpacks. Chris did so in his climbing shoes, I decided that going barefoot was still a better deal, despite the hail. 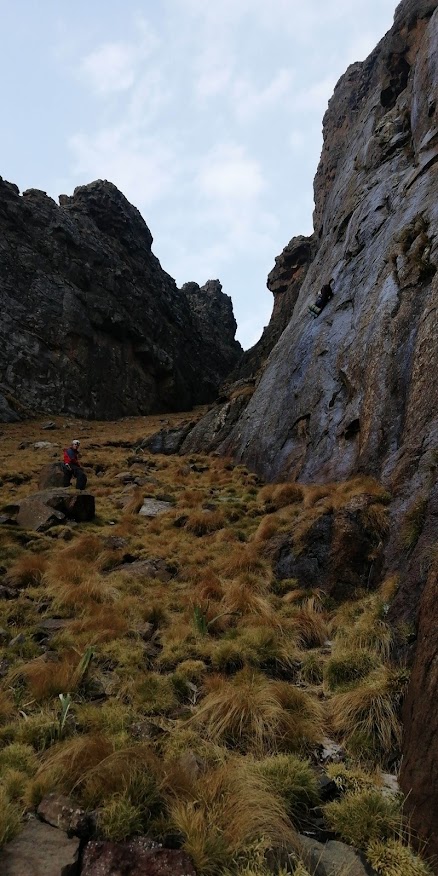 Recovering the bags involved climbing six meters of wet slab, but luckily I could rely on aid-climbing skills honed over years of chickening out routes.
After all, we still made it to Honeymoon Cave before dark. 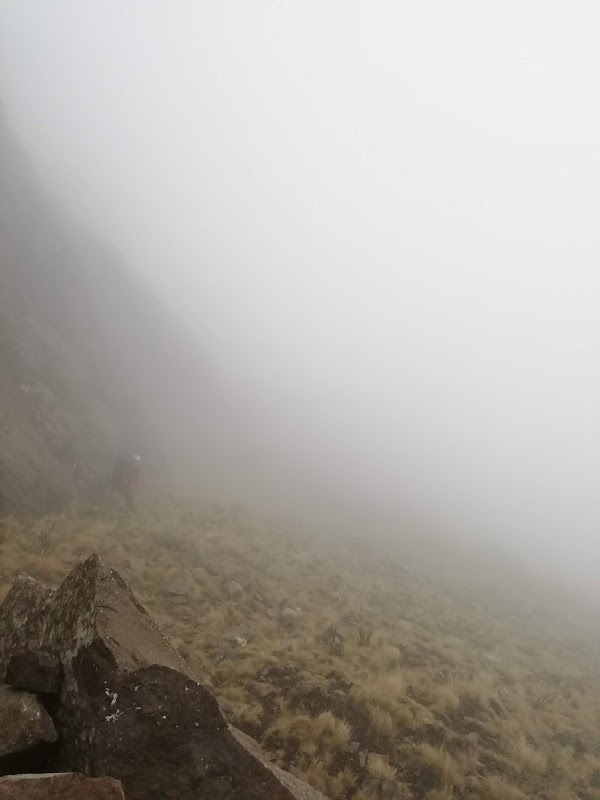 Walking to the cave in a cloud. No headlamp needed though! A rare event to be savoured. / Google Photos 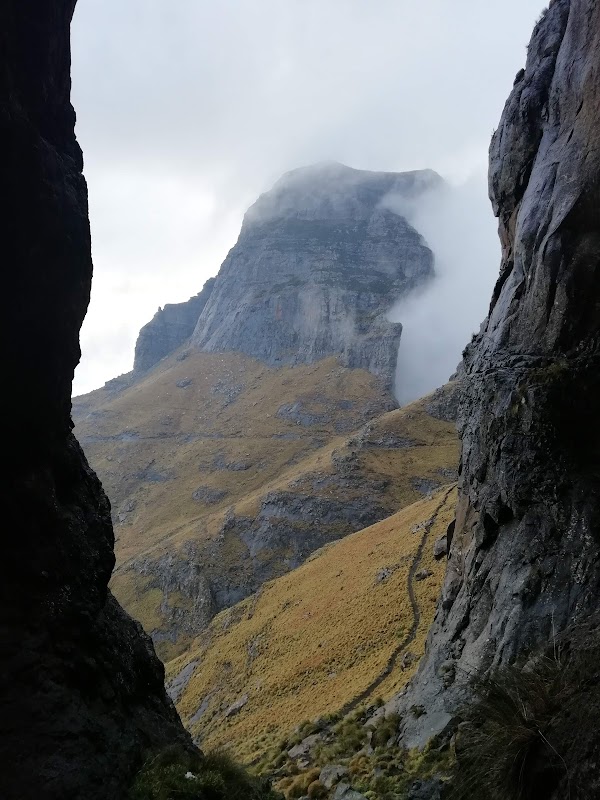 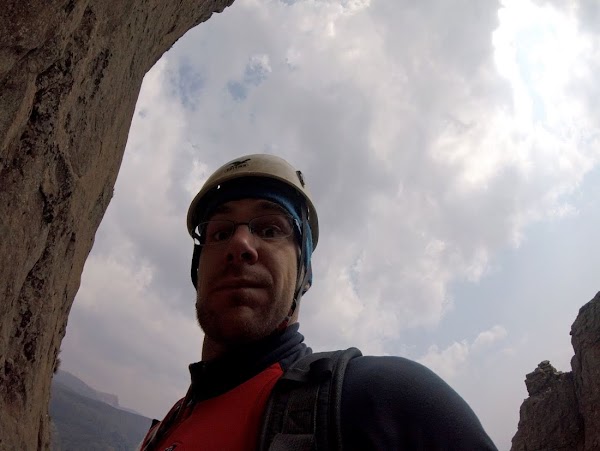 Me, well within my comfort zone… / Google Photos