Recently, together with Olive Imanizabayo, Dennis Hansen, and Scott Armbruster, I published an article where we explore the role of flowers’ ‘behaviour’ in their pollination. Specifically we looked at the movement of some extrafloral structures and how could it affect the access of flower visitors.

Most plants rely on flowers to reproduce. For transferring pollen to ovules (future seeds), most flowering plants rely on animals, that for this reason are called pollinators. In the evolutionary push toward optimizing pollination success, plants develope “floral syndromes”, i.e. tightly correlated suits of those floral traits (color, shape…) involved in signaling to pollinators and matching their body traits. Floral syndromes increase the chances of being pollinated by specialized pollinators and reduce the chances of being visited by ‘pollen thieves’ (animals that eat pollen without transferring it) or aspecific pollinators (that may transfer pollen to flowers of a different species, thus wasting it). 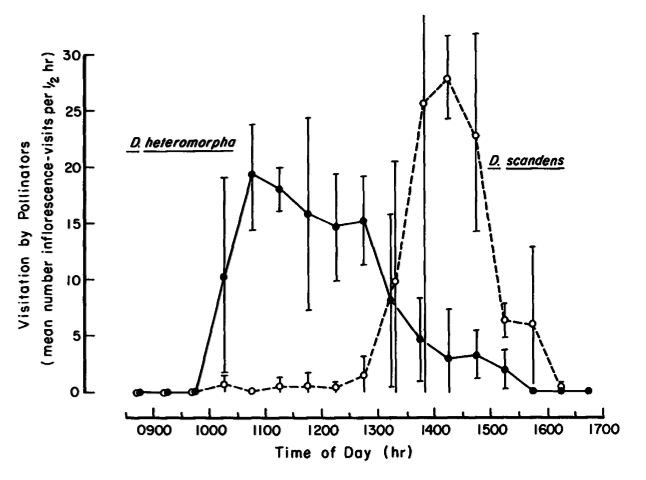 Rates of effective visitation by pollinators of Dalechampia heteromofpha and D. scandens in the Canal Zone, Panama, 13-26 January 1980 (means +/- SD). By Armbruster and Herzig (1984).

Whilst he role of floral morphology in influencing plant-pollinator interactions is well studied, less is known about the role of extrafloral structures. As a contribution to filling this knowledge gap, we studied the relationship between bract motility and pollination in Dalechampia aff. bernieri, a climber endemic of Madagascar.

Dalechampia aff. bernieri has small, bud-like flowers organized in inflorescences. Two large, white, modified leaves called bracts subtend the flowers and act like petals to attract pollinators. Interestingly, the bracts are motile, making the flowers more or less exposed to visitors in different moments of the day. In Dalechampia heteromorpha and D. scandens, bracts have been shown to be highly synchronized across individuals in a population, exposing the flowers to their pollinators only in specific moments of the day. This allows two species to share the same pollinators, still avoiding pollen to be transferred to the wrong species. When the flowers of one species are exposed, the others are hidden, and vice versa (Armbruster and Herzig 1984).

Pictures of D. aff. bernieri blossoms visited by Nomia viridilimbata (a) and Liotrigona sp. (b). Pictures by W. Scott Armbruster (a) and Marco Plebani (b).

Dalechampia aff. bernieri is pollinated very efficiently by Nomia viridilimbata bees, but it is also visited by many bees of the genus Liotrigona that are pollen thieves. With our study, we wanted to assess if the bracts of Dalechampia aff. bernieri are more open when N. viridilimbata bees are more active, and if they close around the flowers to protect them from pollen thieves the rest of the time.

Indeed, we found that bract motility in Dalechampia aff. bernieri is synchronised with its specific pollinator N. viridilimbata. Although there is variability among plants, in general bracts are most open and flowers are most exposed in the late morning, when the activity of N. viridilimbata bees is at its peak. During the rest of the day, flowers tend to be less exposed, thus reducing their chances to be pollinated but also making it harder for pollen thieves to steal precious pollen. 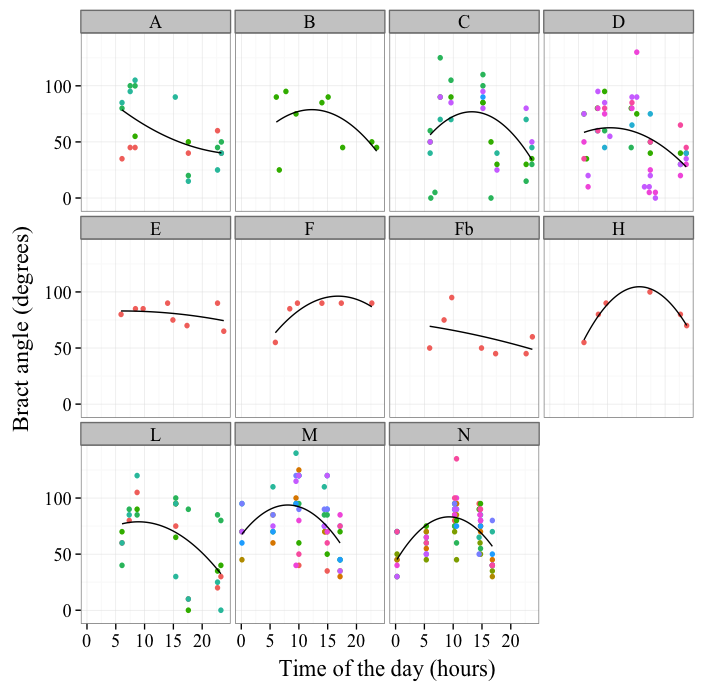 Daily changes in bract aperture plotted separately for each D. aff. bernieri plant studied by Plebani et al. (2015). In each panel, dots of different color refers to a different blossom, but dots of the same color in different panels refer to blossoms on different plants. Curves result from second-order polynomial models fit to all data collected from a given plant.