Since I moved to South Africa, “work hard, play hard” has been the name of the game. At times, I have to admit, it feels like the right order may be “play hard, work hard”. And when I say “play”, I mostly mean “climb”. Here are the accounts of some of my adventures on rock and in the mountains in the last few months. 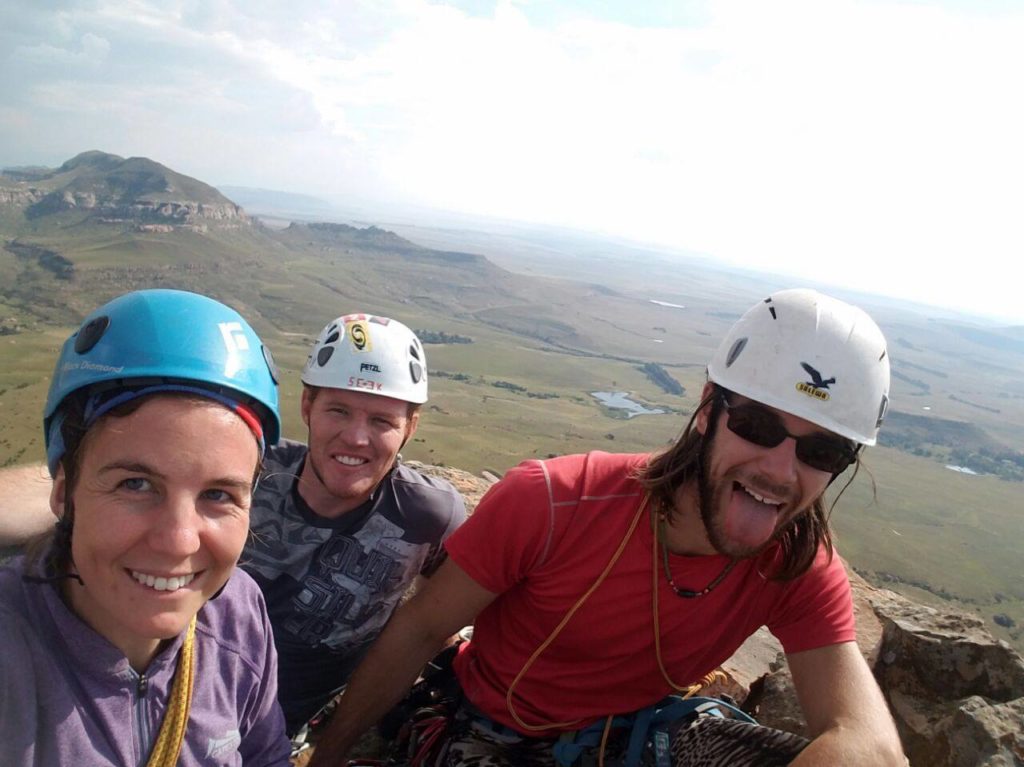 Sonja, Chris and I on top of Long Bolt to Freedom, Swinburne, around March 2017.

There is a crag at the Klipkloof Farm on the banks of the Wit Umfolozi river. It takes a four hour drive from Pietermaritzburg to get there, but the quantity, quality and variety of its routes, as well as the quaintness of the place, make a visit well worth the trip. There had been a weekend-long MCSA trip there at the beginning of May and there was another coming up in mid-June, but some of us decided that we needed an extra visit to keep the Wit Umfolozi fever at bay: on Thursday night my friends Kate, Sonja, Hallam and I packed Gunther (my car for the non-initiated) up to the roof with climbing gear, water and cake and we hit the road.
The weekend went fast. A lot of cake was eaten, a lot of rock climbed. Some highlights: Kate seconded Sands of Time (16 trad), mastering the wide crack with just the right amount of lay-backing, grunting and swearing. Sonja showed us that climbing is overrated compared to fashion posing, reaching a wide ledge on Batman (17 trad) and getting stuck on it in a ‘50s pin-up style pose. Hallam made progress on his 36 metre long mammoth project: he powered through the first, dynamic crux and carried on steadily until the last credit-card-sized crimp proved stronger than his hold. I grabbed a clean (third?) ascent of Hallam’s Purple Sea of Doubt, promptly suggesting a downgrade from 23 to 21 (soft). What’s climbing without showing off? The spirits of the rocks must have heard me though, because soon after my stroll up Purple Sea of Doubt I had to bail an on-sight attempt of Psychobabble Rap (20 trad), getting lowered to the ground on a tiny size-2 nut and leaving some gear behind. After all, as a (wise?) man said, “we’re not here for having fun”. 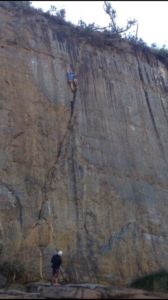 Neil Williamson onsighting Psychobabble and me working it before the send on a later trip. Pitcures by Karen Miller

Prologue: Sonja and I were at the end of one of our notorious, epic climbs seasoned with moments of mastery of all sorts (“How do I tie a prusik knot again?”) when we thought of organizing a workshop on good practices on multipitch climbs (i.e. climbs that continue above the first lowering anchor).
On the morning of June 10th, 2017 a small, eager crowd gathered at the top of the cliffs of Monteseel to learn or refresh the skills of setting up an anchor, belaying a lead climber, belaying a second, and rappelling/abseiling safely. Colin McCoy (mountain guide and MCSA rescue member) showed everyone how to manage a multipitch climb with the assistance of Neil Williamson and Hallam Payne and the help of nifty diagrams and of a portable set of chains. Afterwards all the participants practised rappelling from the top of the cliff, and we concluded the workshop with some climbing on the challenging Monteseel sandstone. 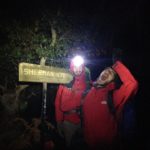 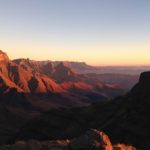 Dawn in the Berg

Kate and Karen in the cold of dawn 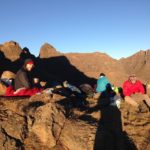 The goal: a two-day Bell Traverse.
The troop: Kate, Karen, Johan and I.
The plan: start from Didima, walk through the Orange Peel Gap, traverse to the left of Cathedral Peak and the Bell, cross the Twins and walk down the gorge of the Mlambonja creek back to Didima.
Easy-peasy. None of us had done the hike before, but with such a clear plan and Kate’s map we had nothing to worry about. As I ominously said, “How could anyone get lost in the ‘Berg? It’s all open grasslands and enormous landmarks!”.
Well…
We set off on Friday evening, counting on reaching Sherman’s Cave in a couple of hours by the light of our headlamps. In fact, by the trout farm dam we were already lost, and it took us hours to even find the start of the path (somehow we had managed to miss the big sign saying “SHERMAN’S CAVE”). We reached the cave around 1:30 am. In the morning, upon starting walking again we realized that the cave wasn’t even Sherman’s! We had taken the turn-off towards Barker’s Chalet Cave, and had slept in an unnamed cave along the path. In spite of this mishap we set off with firm foot and a smile on our faces. At Bugger’s Gully we met a group of MCSA hardcore fellows who were running the Bell Traverse clockwise in a day. That reassured us: either we were both lost, or that was indeed Orange Peel Gap. It was already 14:00 but the trail-runners reassured us: “Twins Cave is three hours away, tops!”. Unsurprisingly we lost the trail again past Bell Cave, well before Twins. We slept under a crisp, moonless sky heavy with stars and woke up to a cold but stunning dawn, and I am sure that sleeping at Twins Cave would not have been half as awe-inspiring.
It took us all of Sunday morning to reach Twins Cave. At that point the path was straightforward, but having taken more than a day and a half to cover the first half of the Traverse, we ended up walking the second half (from Twins Cave back to Didima) in an afternoon.
Along the way we:
– narrowly avoided stepping on an adder;
– were extensively checked out by many bearded vultures, perhaps fooled into thinking that we were an easy lunch by our slow pace;
– saw rheboks and an eagle;
– were greeted by baboons;
– scared off a herd of eland.
The last stretch of the hike, deep in the Mlambonja gorge, borders incredibly lush patches of Afromontane forest, with flowering aloes and my first southern African tree-ferns.
We arrived at the car at 18:00, maintaining our record of reaching our destination by the light of our headlamps for three days in a row.

Sonja and I on the East Ridge of Rhino Peak, my first climb on basalt. Not exactly a “king line”, but a fun day out.